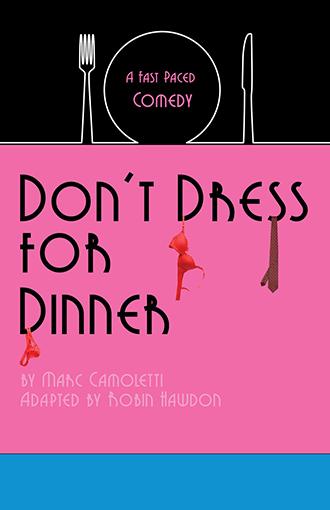 by Marc Camoletti, Adapted by Robin Hawdon
“Hurtling along at the speed of light, [this] breathtaking farce is a near faultless piece of theatrical invention.” -The Guardian

Adapted from the French play Pyjama Pour Six this wildly funny sequel to Boeing-Boeing ran for over six years in London’s West End. This nifty farce draws audiences in with its delicious web of mistaken identities, marital treachery and gourmet cooking! Bernard is planning a romantic weekend with his chic Parisian mistress while his wife is away. He has invited his best friend Robert along to provide the alibi. It’s foolproof; what could possibly go wrong? Smart writing mixed with hilarious hijinks, this labyrinth of twists will have you laughing until the final twist and turn.

Andrew Lloyd Webber’s one woman show, starring company favorite Brianne Beck, tells the story of a girl from Muswell Hill, England who travels to the United States looking for romance.  From New York City to Los Angeles and back again, this young woman is determined to succeed at life and love.  In all of her searching is it possible she’ll find… herself?


A limited engagement you won’t want to miss!